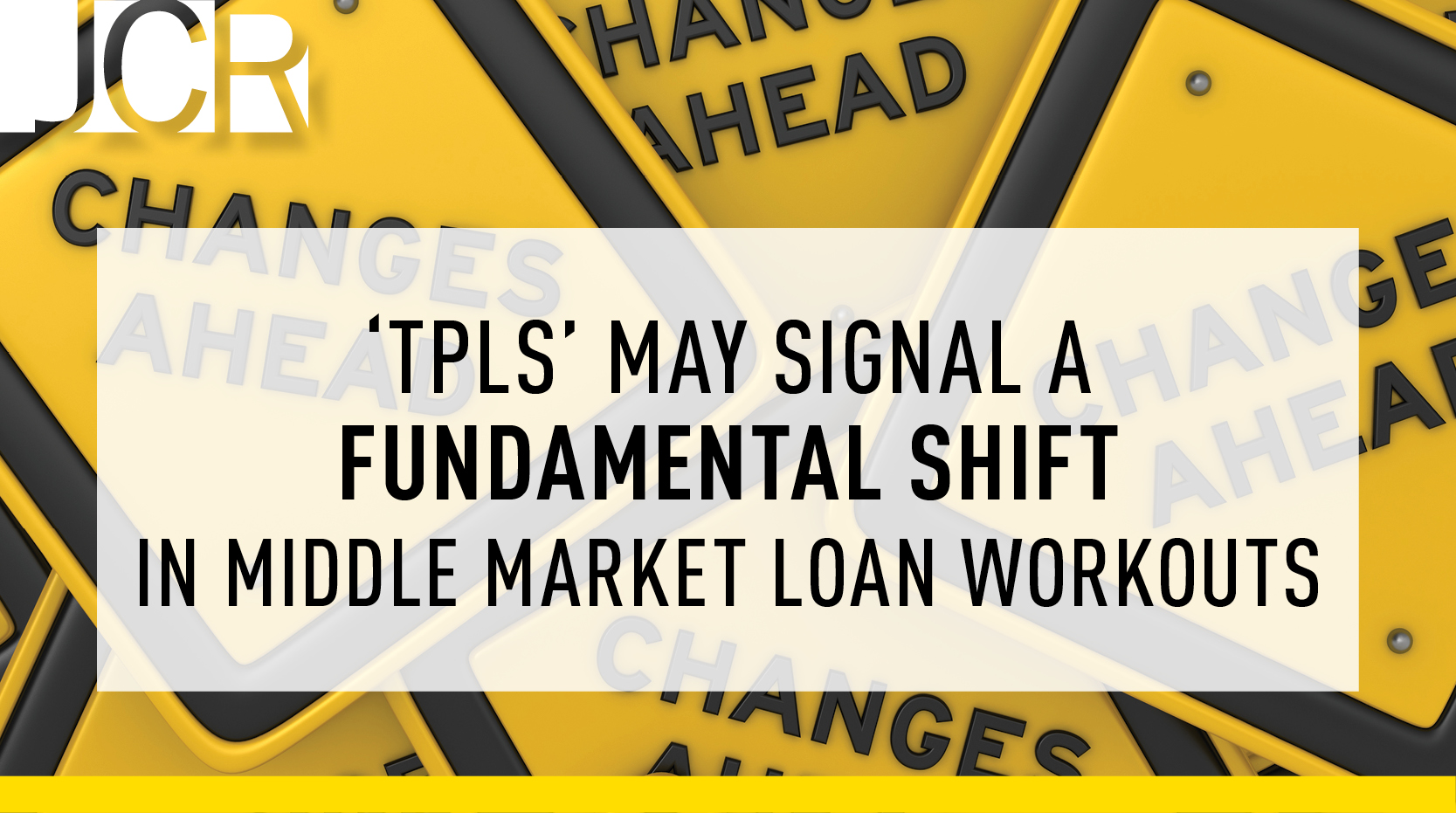 Reposted with permissions from the January 2020 Journal of Corporate Renewal.

The middle market for commercial loans is constantly evolving, but it appears that there is a significant trend that will lead to a fundamental shift in the way nonperforming loans are managed, traded, and worked out. The distressed investment community will feel this change first, but all professionals involved in the middle market will be affected.

The spaces in the capital stacks of middle market companies are being filled by entrepreneurial, equity-funded investment entities that the authors refer to as “Tom Petty lenders,” or TPLs. These lenders are filling the spaces between traditional senior loans and equity. TPLs are fundamentally different from previous mezzanine lenders and are better able to react to a nonperforming loan condition. More importantly, they are changing the way middle market loans are being worked out.

The Evolution of Commercial Debt

When TMA was founded in 1988, the middle market was much simpler than it is today. Most, if not all, of the middle market was occupied by businesses with simple capital stacks. A business was funded with traditional owners’ equity, and if there was a loan on the balance sheet, it was provided by a traditional financial institution, such as a commercial or community bank or a credit union, on a senior secured basis.

The loans were traditionally cash-flow, not asset-based, facilities. If a loan became troubled, the loan officer had significant discretion to restructure its terms, and workouts were straight-forward. With the creation of bank workout departments, workout specialists took an active role in identifying creative workout strategies.

Today, middle market companies enjoy greater opportunities for significant debt financing and private equity group ownership. The capital stack can include multiple tranches of debt financing, including senior secured, junior secured, and unsecured mezzanine loans. In addition, private equity groups are acquiring middle market companies much more frequently and are using debt to leverage their portfolio companies, which has the effect of reducing the amount of invested equity capital, hence increasing their rates of return.

The Secondary Market for Distressed Debt

At some point during the past 40 years, a secondary market for distressed debt emerged, and bank lenders were able to sell their nonperforming (distressed) commercial and industrial (C&I) loans to entrepreneurial purchasers. When the secondary market for distressed loans first began, many of the transactions were negotiated. These purchasers typically paid much less than par and had greater flexibility to work out a distressed loan. If a workout was not feasible, the purchaser could liquidate its collateral and still profit from the transaction. Until about 1999, lenders would either work out their own nonperforming loans or sell them in the secondary market on a negotiated basis.

Then over the period from about 2000 to 2008, the market for secondary market transactions became efficient with the development of online auction vehicles. As the practice evolved, more auctions of distressed C&I debt occurred and hence prices increased, which was good for sellers but not favorable for purchasers. This development reassured sellers that they were receiving a market-based price for the debt they were trading, but purchasers faced a compression of their profit margins. That being the case, the number of purchasers for distressed C&I loans has declined.

From about 2008 to 2012, much of the workout activity was impacted by the effects of the Great Recession and the availability of inexpensive capital that had no alternative outlets (the so-called TINA—there is no alternative—market phenomenon). Since about 2012, the developments described in this article began transforming the middle market.

Adding to this situation is the impact of complex, multitranche debt stacks. Often, the senior secured lender is a traditional financial institution, but the subordinated secured or unsecured lenders are entrepreneurial. These are lenders whose underlying essence is equity. They can utilize debt covenants and features like collateral coverage, but their risk tolerance is more like that of traditional private equity. These so-called TPLs are filling the space between senior debt and equity, taking the place of traditional mezzanine lenders.

When a borrower becomes troubled, the senior secured lenders look to the TPLs for the solution. The senior lender has far less motivation to sell its position, and the TPLs have virtually no interest in allowing the senior to sell to a distressed C&I loan purchaser. Furthermore, the TPLs have little, if any, interest in trading their position; being entrepreneurial in nature, they are willing to view their debt position as an opportunity to create an equity return.

The net effect is that the TPL is the fulcrum point but is in full control of the outcome. In most of these situations, the equity is out of the money with little hope of receiving a return of capital, let alone a return on their equity capital. These entrepreneurial TPLs are effectively on a trajectory to supplant the market for secondary market trades of distressed C&I debt.

As the market continues to evolve, entrepreneurial TPLs will underwrite their opportunities with a built-in structure for addressing a workout.

For example, the TPL will be the go-to alternative for debtor-in-possession (DIP) financing. The senior lenders will have little motivation to provide DIP financing should bankruptcy be a viable alternative. The TPL may be able to negotiate a priming feature to enhance its position, but the senior lender likely will see no benefit from increasing its exposure. Rather, it will look to the TPL for comfort. This is far different from a scenario where the senior lender looks to equity to provide liquidity; equity has no built-in structure for providing additional liquidity on any priority basis.

The senior lender will remain vigilant to ensure that its position is not eroded. But provided that the initial underwriting was not seriously flawed, the senior lender will have an equity cushion and therefore flexibility to allow the workout to progress. But senior lenders will have increasingly less interest in identifying creative workout strategies; they may be able to use traditional loan portfolio managers to oversee the restructuring.

The bulk of the effort will be made by the TPL. Increasingly, entrepreneurial TPLs are managed by sophisticated professionals whose backgrounds provide the TPL the opportunity to identify creative solutions and work out a troubled situation.

If this trend continues, the turnaround process will evolve yet again. Middle market chief restructuring officers will work less often with senior bank workout officers and more often with what are effectively private equity portfolio managers.

This also means that there will be far fewer opportunities for secondary market transactions in which an entrepreneurial group enters the situation after a default has occurred. The equity gap would have been eliminated at the initial financing of the transaction.

The opportunity is now for secondary market distressed loan acquirors to move up the life cycle. They should be initiating subordinated loan facilities in conjunction with traditional senior lenders rather than allowing the opportunities to be captured in whole by this new breed of entrepreneurial junior lenders.